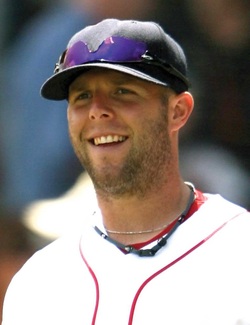 Dustin Luis Pedroia is an American professional baseball second baseman for the Boston Red Sox. He was born August 17, 1983 to Guy and Debbie Pedroia. Dustin has an older brother Brett Pedroia. The Pedroia family is of Swiss Italian and Portuguese heritage. He attended Woodland High School in Woodland, California and attended college with a full scholarship to Arizona State University. In his senior year of high school he was chosen as the MVP. In his second year at ASU, he offered to give up his scholarship to recruit better pitching. At the end of his college years he was named ASU on Deck Circle Most Valuable Player. In Pedroia’s high school and college years he started out playing at Shortstop. Since there were so many shortstops, the coaches moved him over to second base. Second base is where he has played his whole career in the major leagues. Pedroia has been on the Boston Red Sox his whole major league career which started back in 2006. In November of 2006, Dustin married his Wife Kelli. Together they have two kids, Cole and Dylan. Dustin Pedroia’s current salary is 10.25 million dollars. He is only 5’8” and weighs 165 lbs. Pedroia has won many awards including NCAA Defensive Player of the Year, Golden Spikes Award Finalist, Double A All-Star, Red Sox ML Base Runner of the Month, Red Sox Minor League "Quality Plate Appearances" Award, Post-Season Eastern League All-Star, Minor League Player of the Year, Red Sox Minor League Offensive Player of the Year, AL Rookie of the Month, AL Player of the Week, Players Choice AL Outstanding Rookie, AL Rookie of the Year, two time AL All-Star Starter, two time AL All-Star Reserve, three time AL Gold Glove Winner, two time Red Sox Heart and Hustle winner, AL MVP Award, AL Silver Slugger, Fielding Bible Award, and was a two time World Series Champion with the Boston Red Sox. 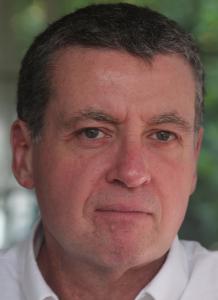 Edward J. Delaney is an American author, documentary filmmaker, educator and journalist. He was born in Fall River, MA in 1957. Edward J. Delaney currently is living in Rhode Island. He received his B.S. in Finance from the Fairfield University Dolan School of Business in 1979 and M.S. in Mass Communications from Boston University. When he first started out, he taught at the University of Colorado and Colorado State University. As a journalist he has done articles for “The Denver Post”, “The Colorado Springs Gazette” and “The Chicago Tribune”. He was an assistant editor for the Niemen Foundation for Journalism at Harvard University from 2008 – 2009. Currently, he is a professor of Creative Writing at Roger Williams University and has been working there since 1990. At Roger Williams University, he is an editor of the literacy journal “Mount Hope”. Some books he has written include Broken Irish, Warp and Weft, and The Drowning: and Other Stories. He has won many awards for his novels and films including first place in Rhode Island International Film Festival, a 2006 L. L. Winship/PEN New England Award, a 2008 Literacy Fellowship, an O. Henry Award, National Education Reporting Award, and National Education Writing Award.